Q. DO YOU ACTUALLY CUT OFF BALLS?

I’m sorry if that crushes your dreams of becoming a eunuch, but If you are still reading I want to tell you a little about the castrations that I occasionally re-enact in my Preston White Room.

WARNING: This 2.5 minute video has audio.

Castration is not a topic that I’ve ever featured on my website, nor is it an activity that’s listed amongst the medical services I provide. There is a very good reason for that, it’s called the shock factor. Simply put, my castration roleplay could never carry the same adrenalin infused thrill if you were to come along to my clinic expecting it.

Some protocol is required to become a contender for my neutering process. Your testicles are more likely to meet my pliers if you’ve been for a couple of visits, are pretty open minded about the medical play you would like to try, you have the right amount of trust to leave scenarios up to me, and of course it’s essential that you have the balls! 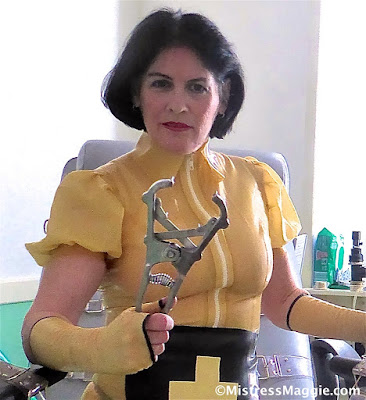 There is nothing unusual about my castration kit, just the typical pliers and bands you can buy on Ebay. They were never made for using on humans, their purpose being for banding the nuts of small farm animals; lambs mainly, before they reach one week old.

Given that there is a considerable size difference between the balls of a little lamb and those of a grown man, you can imagine how dangerous the kits can be if used foolishly. With that in mind I did do some small modifications to my kit so I can castrate you easily, not without some discomfort, though in a much more subtle manner than a sheep farmer.

Potential patients should feel lucky that my approach to sessions has always been safe and sane. Admittedly, I do add a fair few skilfully sadistic twists whenever I can, but I’m not about to ruin my reputation by doing something stupid. My castration operations only became possible by taking the time to find the right compromise of fear and fabrication, and I take great joy in making my patient believe it's the real deal.

The video was filmed with an unsuspecting patient in the summer of 2017. I can promise that the balls in the video were unharmed, in fact the slave in question is still running round, balls between legs, wondering what I am going to do with them next.

Hmmm - Now that’s a queer thought. It is actually possible to castrate my blokes twice!!!
Posted by Mistress Maggie at 15:48