Well, almost eureka. My discovery does include water displacement!

I am jumping for joy following a watersports session with one of my slaves.


My slave was strapped down in my clinic being catheterised. The contents of his bladder had just begun flowing into his cath bag when he asked me a question.

“Are you going to make me drink my own piss today Mistress?”

It wouldn’t be unusual, I often do. I serve it in a glass or a dog bowl and the filthy bastard will quickly lap up the lot. But his question poised a bit of a challenge, because we were combining slaves’ catheterisation with a breathplay scene that day.

That’s when I had my eureka moment.

Unlike Archimedes who was having a splash around in a bath tub when he came up with his displacement theory, I was in the tricky position of controlling a pervert and having to think on my feet when I discovered mine. 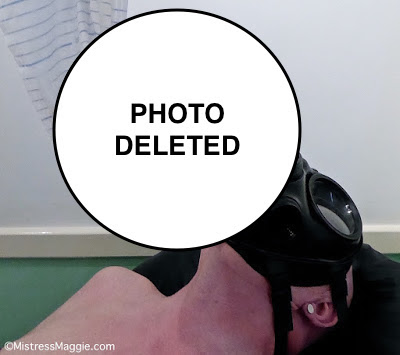 It came to mind that towards the end of the 20th century our British forces had been issued a gas mask that came with an integrated drinking straw, and that I had the very same S10 model, which is also known as an Avon mask hanging on a hook right beside me. In no time at all I had it strapped to my slave ready for testing.

Miraculously, the drinking straw coupled perfectly with the valve on the cath bag, and slave could now sniff on my golden nectar AND drink his own piss both at the same time.

Admittedly, drinking your own piss is not for everyone. No. However, drinking my precious piss is a far more attractive and popular concept.

I get an unbelievable amount of requests for watersports, a couple of my slaves practically live on the stuff, many more are gasping for their first taste of my nectar. Sometimes there simply isn’t enough of my fine tasting nectar to go around. It’s easy to understand how using some of my slaves as vessels for fermenting and recycling my golden nectar, would leave more available for others.

Two weeks later and slave was back for more of my nectar. This time I was wearing my latex piss pants, a good alternative to a toilet and particularly useful when a nectar loving slave needs feeding. The tube from my pants was placed between his lips and he partook in a full bag of my golden fluids. He began benefitting from his drink immediately, as a slave does need to be kept hydrated when he’s cocooned like a maggot in layers of clingfilm plastic. 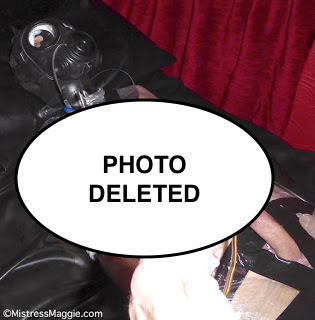 Once again he was masked and catheterised, with the drinking straw from the S10 making a secure connection with his drainage bag he was perfectly equipped for piss recycling. It was inevitable that given time my piss would make its journey through his body and begin collecting in his catheter bag.

Sure enough, a steady stream of golden fluid was soon appearing and filling it up. Slave needed no instruction on what to do next; the sound of sucking and swallowing went on for a while and slave was now in the process of fermenting and recycling my nectar for a second time.

So, it seems that a bag of my golden nectar, an S10 mask and a catheter kit is all I need to keep a watersports fanatic supping and recycling my piss all day.

The question is, just exactly how long can a slave survive on one bag of his Mistresses special fluids?

Posted by Mistress Maggie at 23:58